An In-Depth Report For Investors On Key Economic Fundamentals

Supply chain problems, often cited in the media as the main cause of inflation, are expected to diminish greatly by the end of the year. The high inflation rate on goods is expected to revert to the normal 2% rate experienced for the decade preceding the pandemic by the end of 2022, and prices on some goods may even be rolled back to pre-pandemic levels. For example, lumber prices at Home Depot soared in the Spring of 2021 but reverted to pre-pandemic levels by early Fall. 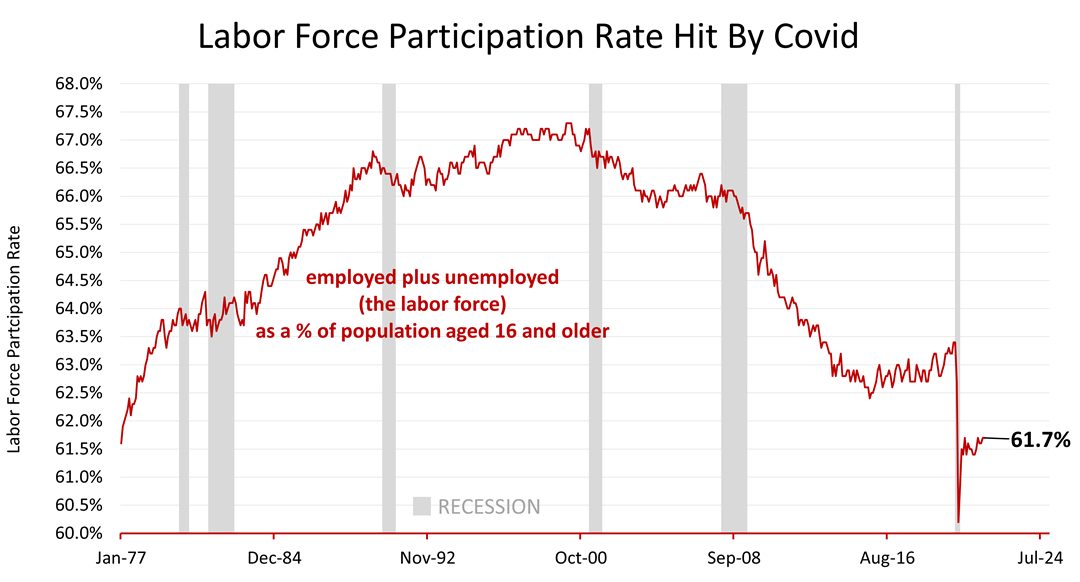 Price hikes imposed on services are unlikely to be rolled back. Price hikes on services have been triggered by the need for employers to pay higher wages, resulting in  wage inflation. For example, McDonald’s CEO, Chris Kempczinski, at a quarterly earnings call with investors on October 27th, said prices on its menu in 2021 have risen by 6%. He blamed a tight labor market for making it harder to keep restaurants open late and said wages at corporate- owned restaurants in 2021 soared more than 15%.

The labor shortage. The pandemic convinced  Americans to drop out of the labor force. Many baby Boomers, an oversized percentage of the U.S. population, are now 65 or older and have “aged out” of the labor force. They’ve retired, shrinking the work force. Many individuals 65 and older who were expecting to work until age 70 likely decided not to risk their health by working outside of their home during the pandemic.

In addition, many parents with school-age children left the labor force to stay home with their children. Coronavirus made paying for child-care just to be able to work much less attractive financially. Many Americans may have viewed the pandemic as an eye-opening event, causing a reprioritization of their goals in life, dialing back financial goals and moving to a lower- cost place of residence. 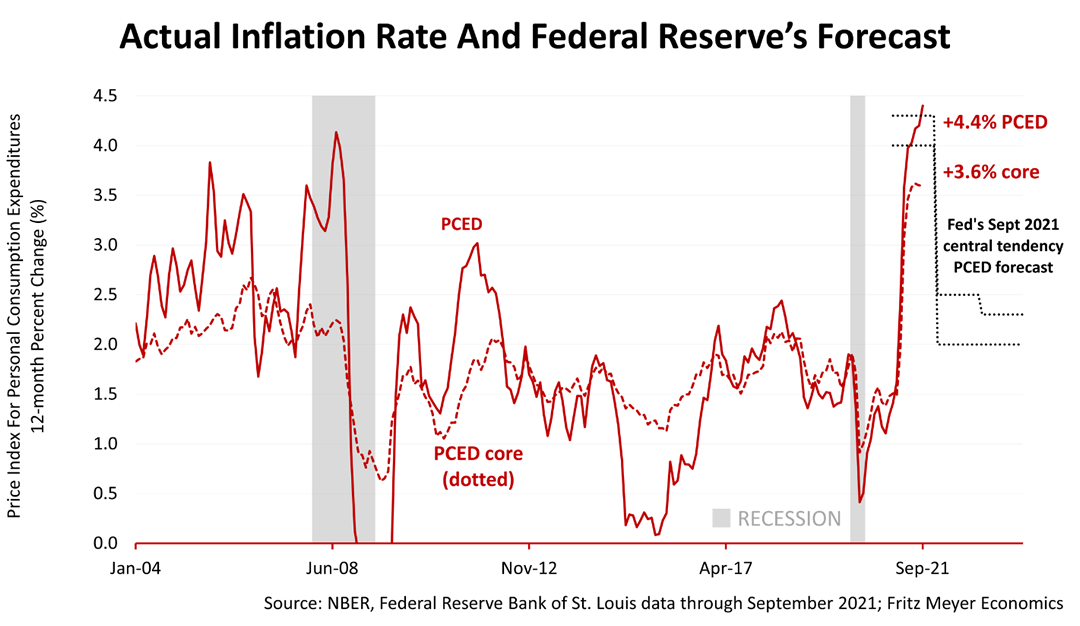 About one and a half million more workers than expected retired, creating the labor crunch and sending wages higher. However, wage inflation is not expected to get out of control.

Inflation. The inflation rate, as measured by the Personal Consumption Expenditure Deflator (PCED), is shown in this chart. The PCED is slightly different from the Consumer Price Index (CPI), which is the inflation benchmark most often referenced in the consumer press, but PCED is the inflation index referenced in Fed policy statements. The dotted red line shows the PCED but excludes food and energy prices because their volatility often distorts the picture.  The most important data are shown in the gray lines, which represent the range of forecasts of the 19 members of the Federal Open Market Committee -- central bankers on the Federal Open Market Committee at the Fed, who set U.S. interest rates.

They are forecasting an abrupt end of the high inflation experienced in the pandemic in January 2022. The upper gray line represents the average low forecast of the FOMC, and the lower gray line shows their average forecast at the top of the range. Unless FOMC members suddenly changed their minds since meeting in  late September, they predict inflation will plunge to 2.2% in January 2022.

Keep in mind, the FOMC members have changed their inflation forecasts considerably in recent months. In June, the committee hiked their inflation forecast by 50% over March, and in September they hiked their forecast an additional 20%. However, the consensus forecast of 60 economic professionals surveyed quarterly by The Wall Street Journal agree with the 12 central bankers. That’s significant. Even though the Fed has been wrong about how high inflation will head and how long it will last, the consensus of economists believe inflation will be temporary.

To be clear, the Fed says inflation will revert to its trend rate of 1.5% annually, to which it clung for a decade before the pandemic disrupted the supply chain and caused a labor shortage. The consensus believes the FOMC’s assertion the current spate of inflation will dissipate over the next year.

The 60 economists surveyed in early-October 2021 see a continued expansion over the four quarters just ahead. A 4.8% growth rate is forecasted by The Journal’s panel of 60 economic experts for the final quarter of 2021, and they expect much higher U.S. growth for not just the last quarter of 2021 but also for the following three quarters. Inflation will not end the expansion.

The central bankers and consensus of economists is that supply chain problems will, for the most part, be resolved in the 12 months ahead and the spike in wages is not the start of a wage inflation spiral that will be with us long-term. Wage inflation will bring workers back who have sidelined themselves during the pandemic.  With above- average growth expected through the end of the third quarter of 2023, the consensus of economists and central bankers' projections are for a continuation of the economic expansion. Expect robust growth in 2022.