Confounding Valuations Of The Largest Five Companies In S&P 500

The most important measure of the financial strength of the United States is the Standard & Poor’s 500 stock index. It’s widely watched but constantly surprising.

Of the 500 companies in the S&P 500, the five largest account for 21% of the total value of the much-watched index. You won’t believe where they are currently valued!

Ranked by market capitalization, the five companies are:  Apple, Microsoft, Amazon, Google, and Facebook. The Big Five are trading at low PEG ratios, relative to the other 495 stock stocks in the S&P 500 index. 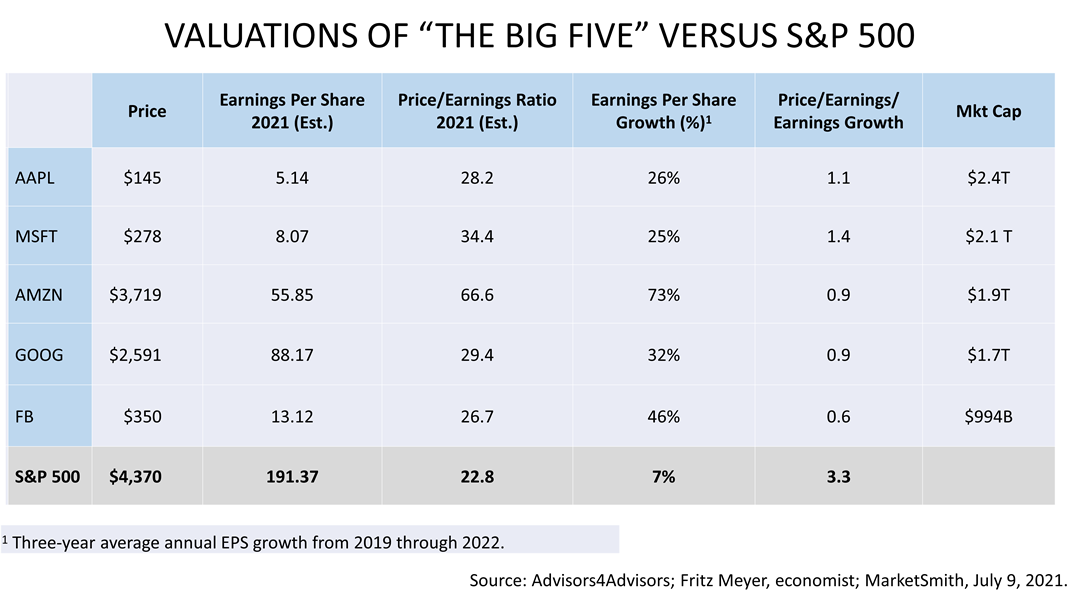 These five stocks may appear expensive relative to the S&P 500’s average P/E ratio of 22.8, but their earnings growth rate is reflected in the PEG ratios and they are cheap by this important metric relative to the other 495 companies in the index.

Stocks are risky investments and they are volatile. Just yesterday, the S&P 500 suffered its worst one-day decline since May, sliding more than 2% during the day before closing down 1.6%.  The index shot back up by 1.5% today.

Uncertainty about the risk of the Covid-19 variant as well as inflation are likely to cause big drops in the S&P 500 in the days ahead. Yet stocks are the growth engine of a retirement portfolio and a key in a comprehensive tax-smart investment plan built to last the rest of your life.  With volatility high and tax laws about to change, please consider whether the next stock selloff could be a long-term planning opportunity.

The table entitled, “Valuations Of ‘The Big Five’ Versus S&P 500,” was derived from a class for financial professionals by Fritz Meyer, an independent financial economist, on Advisors4Advisors on July 13, 2021.