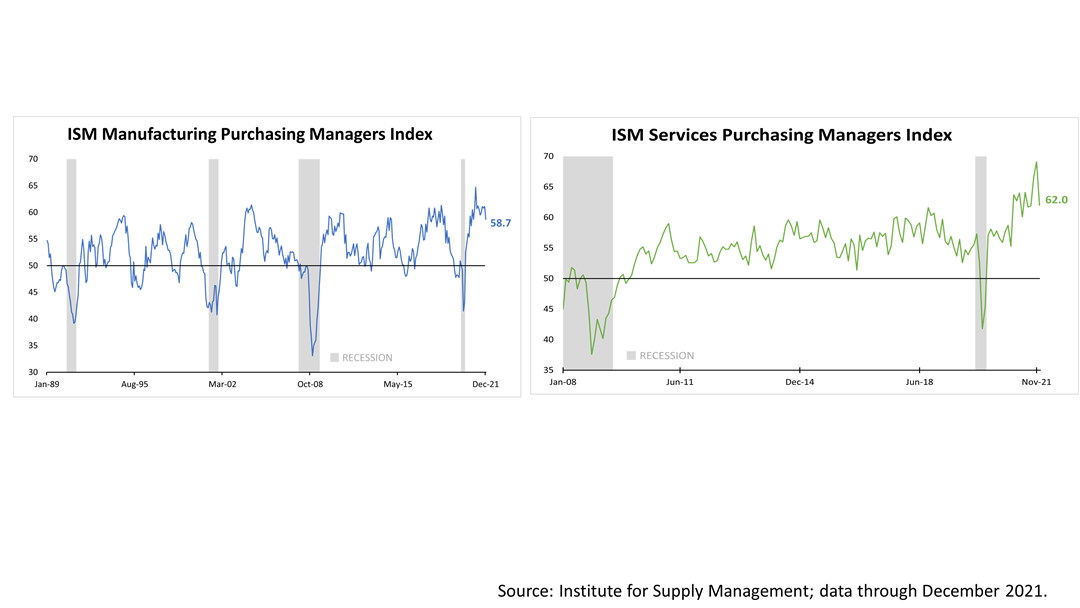 Services account for 89% of U.S. economic growth, while manufacturing accounts for 11%, and about 90% of jobs in the U.S. are created by the service sector.

The purchasing managers indexes, which are based on monthly surveys conducted by the Institute of Supply Management, are designed to slump to less than 50 before a recession. The manufacturing purchasing index has decades of history. It’s been a good forward-looking indicator of recessions, but it dropped below 50 during periods of strong economic expansion in 1995, 1999, 2003, 2013, 2016.

At 58.7 and with the new orders sub-component of the  index at 60.4 in December, nothing like a recession is in the charts. The economy red hot economy is slowing to a simmer, but these two key indicators of economic conditions are not signaling an end to the expansion that began in April 2020. 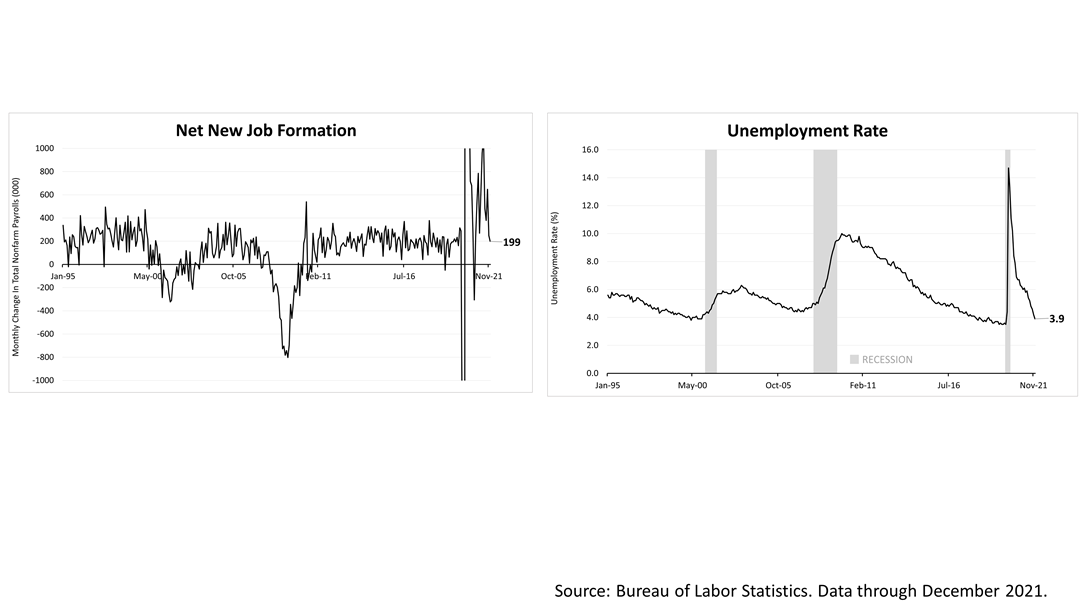 The labor market is tight and employers are having trouble filling jobs. As a result, only 199,000 new jobs were created in December, a disappointment compared to the 405,000 net new jobs that were expected by Wall Street. With lackluster new job creation, the unemployment rate dropped from 4.2% in November 2021 to 3.9%. It’s putting pressure on employers to raise wages, which is part of the inflation threat the U.S. has faced since the pandemic first hit in February 2020. 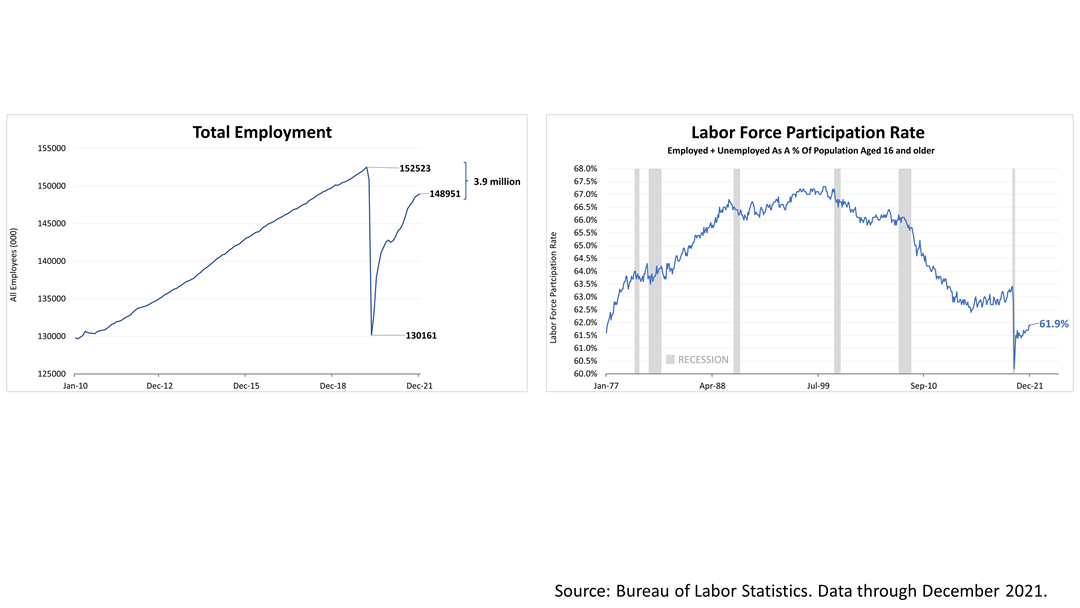 The labor shortage is explained by these two charts.

Trouble is, the labor participation rate has not rebounded to pre-Covid levels, probably because many individuals in their 60s and older retired after the outbreak. That’s a primary cause of the shortage of workers. 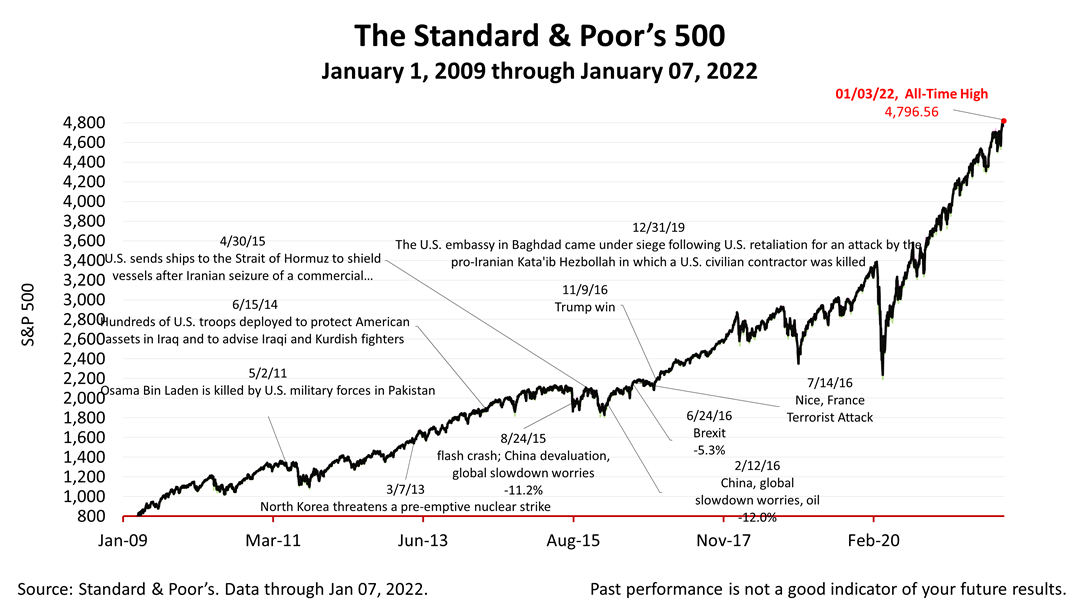 Higher wages, along with supply-chain related price hikes on goods, have caused an inflation spike. The Federal Reserve Open Market Committee meeting minutes from December 15, released earlier this week, indicate a rate hike is likely to come in March. Until now, it had been expected that the first rate hike would not come until June.

You Heard it From a CFP Episode 30: Why US Markets...
Make This Financial Resolution For 2022