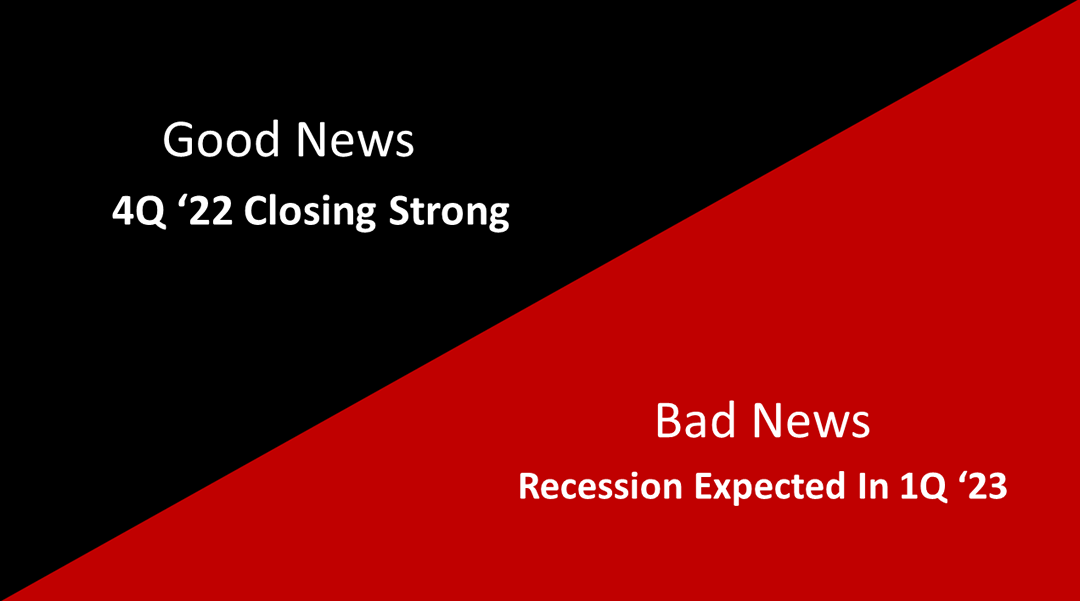 The good news is November data continue to come in strong, but the bad news is that a key forward looking indicator is signaling the economy is about to suddenly lose momentum.

Strong economic data for November continued to come in but the forward-looking index of Leading Economic Indicators for the U.S. fell sharply in November, marking its ninth straight monthly decline. 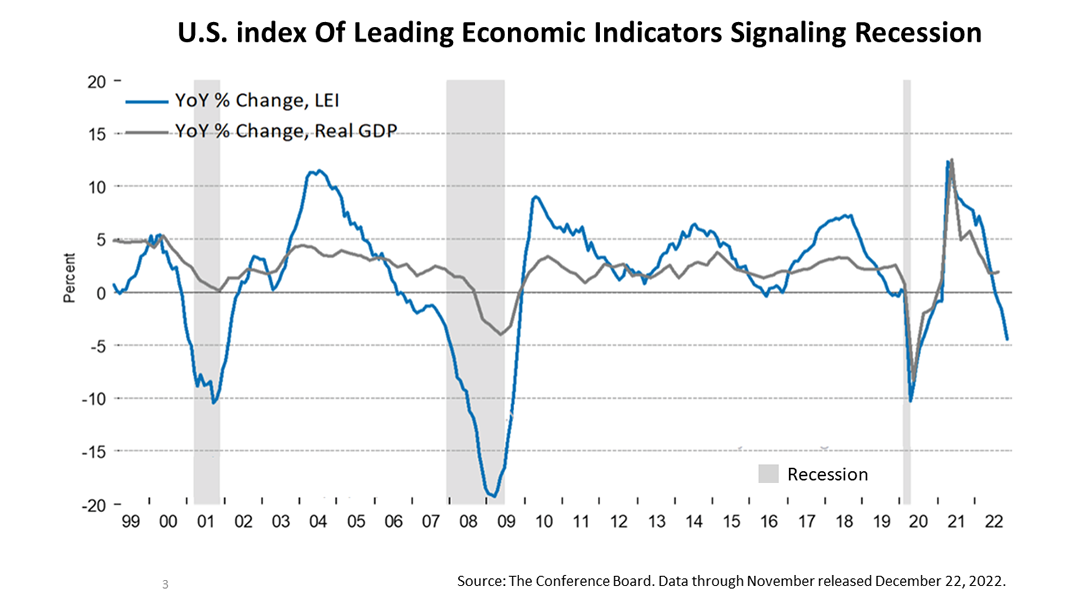 “The US LEI suggests the Federal Reserve’s monetary tightening cycle is curtailing aspects of economic activity, especially housing,” said Ataman Ozyildirim, a senior economist at The Conference Board. “As a result, we project a US recession is likely to start around the beginning of 2023 and last through mid-year.”

The LEI has definitively plunged months before every recession since the 1950s, except for the Covid-19 recession, which was different from all other downturns. 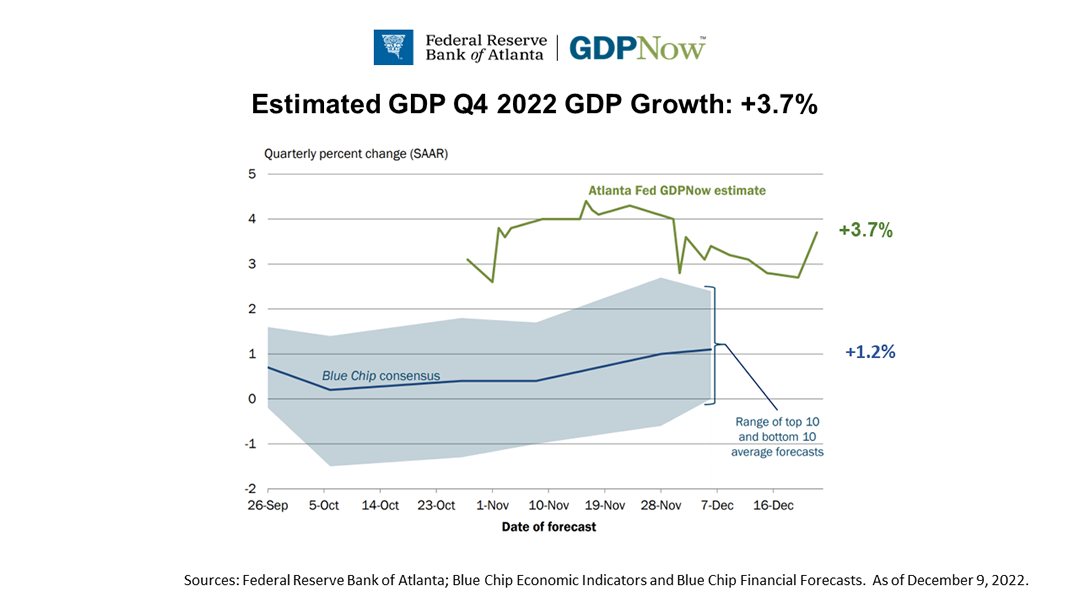 The good news:  The GDPNow algorithm forecasts U.S. economic growth in the current quarter, which ends December 31, will be 3.7%, a very strong growth rate. In contrast, the consensus of leading economists surveyed by Blue Chip Economics on December 7 predicted a growth rate of 1.2%,.

The GDPNow algorithm was designed by the Federal Reserve Bank in Atlanta to update its growth estimate as new economic data are released throughout every quarter. The actual growth rate of U.S. gross domestic product is not announced by the government until a month after the end of every quarter. 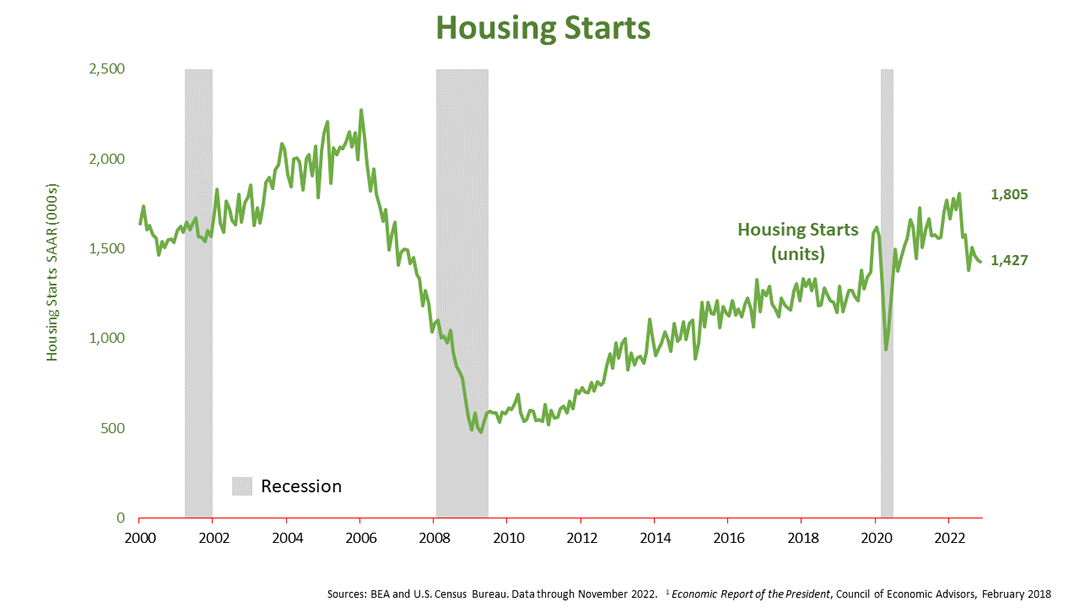 In addition, in another sign of economic strength, housing starts declined in November but they’re not so far off the recent peak of 1.8 million and much higher than the level hit before entering the 2008 recession.

Though the LEI is signaling a recession is about to hit in the next three months, the strength in housing and the strong growth prediction for the current quarter from the GDPNow algorithm indicates the recession could be short-lived and still might be averted depending on Federal Reserve policy in the next few months. 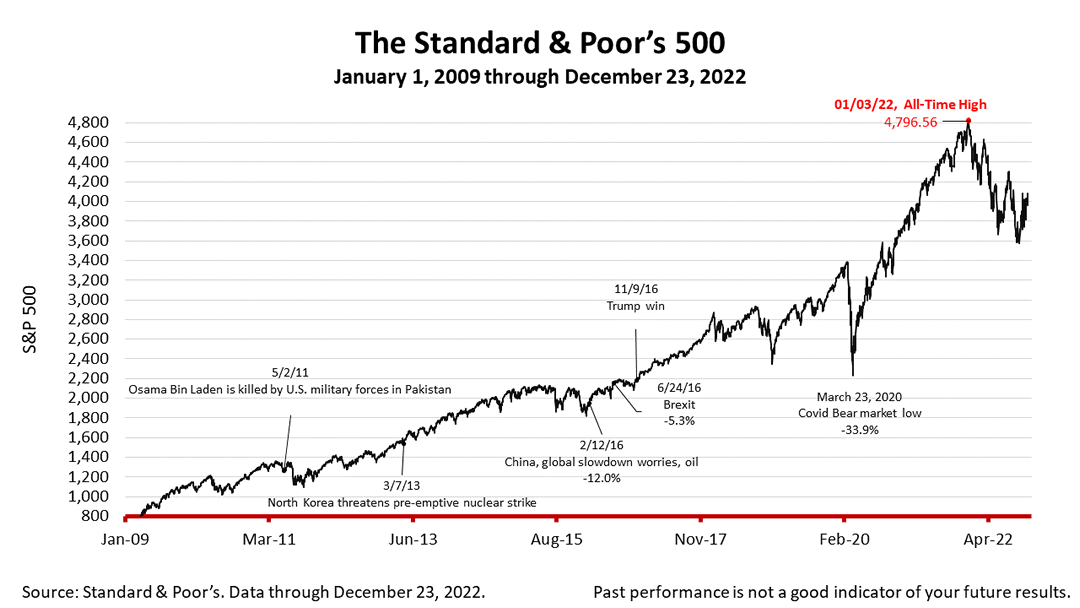 The bear market, now six months old, has been volatile, as hot-money Wall Street speculators moved in and out of stocks this past week, amid the usual tax-driven loss-taking that occurs before the end of every year.

The Standard & Poor's 500 (S&P 500) is an unmanaged group of securities considered to be representative of the stock market in general. It is a market-value weighted index with each stock's weight proportionate to its market value. Index returns do not include fees or expenses. Investing involves risk, including the loss of principal, and past performance is no guarantee of future results. The investment return and principal value of an investment will fluctuate so that an investor's shares, when redeemed, may be worth more or less than their original cost. Current performance may be lower or higher than the performance quoted.   ​​​​​​​​