The Inspirational Story Of Hetty Green, The Warren Buffett Of The Early 1900s

In an era of financial titans like Elon Musk, Jeff Bezos, and Warren Buffett, it’s hard to imagine that, at the turn of the 19th century, one of America’s dominant investors was a woman. But it’s true. 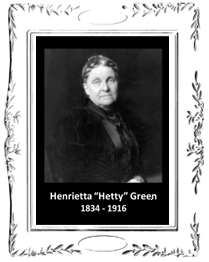 Born in 1834, in New Bedford, Massachusetts, Henrietta (Hetty) Green came from a wealthy family and read financial reports to her grandfather as a child. The knowledge stuck, and she reigned as the greatest value investor of her era and an influential figure in America for many decades.

Hetty Green was a key financier in rescuing the U.S. Treasury from a frightening panic. The Panic of 1907 was the last major financial crisis to occur without the support of a central banking system in the United States. If not for J. Pierpont Morgan’s effort to secure financial support from banks and trusts, along with a small group of individual investors, including Hetty Green, the entire U.S. financial system would have collapsed, and the nation would have descended into a Great Depression-level event. Historical accounts indicate the Panic of 1907 was so terrifying that it led to codification of the nation’s central banking system, the Federal Reserve Act of 1913.

Less well-known, however, is the role played by Hetty Green. In an era in which women were forbidden from holding a position on a corporate board or even exercising the right to vote, Hetty Green was invited to the Morgan Library in midtown Manhattan to brainstorm solutions to the national financial emergency.

In contrast to J. P. Morgan, Hetty Green saw the crisis emerging in 1906 and prepared for it by raising a mountain of cash well in advance. This enabled her to assist, not only with her great financial mind, but also with her wallet. She lent generously at reasonable rates to steer the nation clear of a self-reinforcing deflationary vortex.

Hetty Green’s financial help during the Panic of 1907 was the most public accomplishment of her long career, but her achievements over the prior decades were no less impressive. Hetty Green remains one of America's all-time best investors.

For more on Hetty Green’s inspirational story, visit the Museum of American Finance online at www.moaf.org, and see the Fall cover story of Financial History magazine, which profiles Hetty Green.

Financial historian, Mark J. Higgins, contributed to this article. His full financial history of the U.S., The Enlightened Investor (Greenleaf Book Group), is expected in bookstores in Fall 2023.