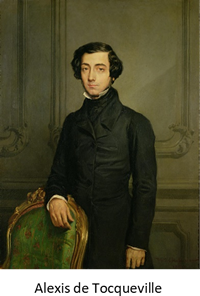 American exceptionalism is a phrase coined 180 years ago by French historian, Alexis de Tocqueville, to describe what makes our democracy great. Today, it is a colloquialism used to describe America’s unique values, resources, and historical development, as well as its system of government. But is there more to this patriotic slogan than meets the eye?

The battle waged by the U.S. central bank against inflation since March 2022 exhibits the remarkable strength of the Federal Reserve System. The Fed, a uniquely American construct of Alexander Hamilton, was enacted into law 15 years after the birth of the U.S.

The young democracy de Tocqueville praised in 1835 created the nation’s first central bank, which repeatedly has been reinvented, revised, and modernized to keep up with changes in the economy, technology, and communications.

Today, the Federal Reserve’s Federal Open Market Committee (FOMC) conducts itself with a level of transparency unthinkable from just three decades ago. Until 1994, the FOMC did not issue a policy statement until weeks after its meetings, forcing investors to closely monitor the activities of the Fed’s open market trading desk in hopes of determining if the Fed was adjusting monetary policy.

Today, the FOMC issues not only a lengthy policy statement after each of its eight scheduled meetings, but interest-rate policymakers release minutes and quarterly projections made by each FOMC member at every meeting, and the Fed chair announces policy decisions and takes questions from the world financial press in a live-streamed event following every FOMC meeting.

For the largest economy in the world to be able to respond to inflation, which has destroyed many of the world’s empires in the past, demonstrates why Tocqueville called it American exceptionalism.

Only in 1977, after the U.S. experienced ruinous inflation for over a decade, did Congress modify federal law governing the Federal Reserve’s mandate, which enabled then-chair Paul Volcker to put an end to the Great Inflation of 1965 to 1982. The Federal Reserve Reform Act of 1977 revised the central bank’s mandate by explicitly directing it to promote maximum employment and stable prices as co-equal goals.

Moreover, the Fed has tamed inflation in 2022 while the U.S. imposed economic sanctions on Russia for its lawless invasion of Ukraine, which threatens the rules-based order imposed by the U.S that kept Europe free of war since the end of World War II in 1945.

While the Federal Reserve demonstrated its exceptional qualities in 2022, the U.S. Department of Energy in December announced a major scientific breakthrough in fusion ignition on Monday, that paves the way for major advancements in clean power as well as national defense. The world-changing scientific achievement required a commitment of billions of taxpayer funding annually for seven decades.

“No other great power is better placed to build the necessary partnerships and lead the way in tackling the major problems of the twenty-first century,” G. John Ikenberry, the world’s leading scholar of the rules-based U. S.-led world order, wrote in the December 2022 issue of Foreign Affairs.

“That China is ramping up pressure on Taiwan and that Russia sought to yoke Ukraine to its sphere of influence does not suggest American decline or the collapse of liberal order,” according to Prof. Ikenberry. “On the contrary, the crises exist because Taiwanese and Ukrainian societies want to be part of a global liberal system.”

Fighting to support a world order spreading freedom and transparency, the Government of the United States made a good decision to invest in fusion research for decades, while simultaneously leading the world in creating the internet and managing the web’s good and bad effects in an open society.

Which brings up yet another way American exceptionalism revealed itself this week: In charging cryptocurrency king Sam Bankman-Fried with masterminding a criminal conspiracy and discrediting the cryptocurrency craze, the U.S Government showed its knack for correcting its mistakes.

“The global order the United States has built since the end of World War II is best seen not as an empire but as a world system,” according to Prof. Ikenberry’s article entitled, Why American Power Endures. “A sprawling multifaceted political formation, rich in vicissitudes, that creates opportunity for people across the planet.”